According to the American Backflow Prevention Association (ABPA), “Backflow is the undesirable reversal of flow of non-potable water (irrigation water or other treated water) through a cross-connection and into the piping of a public water system or consumer’s potable (drinking) water system. There are two types of backflow… backpressure backflow and backsiphonage.

Backsiphonage is backflow caused by a negative pressure (i.e., a vacuum ~ or partial vacuum) in a Public water system or consumer’s potable water system. The effect is similar to drinking water through a straw. Backsiphonage can occur when there is a stoppage of water supply due to nearby fire fighting, a break in a water main, etc.”

To protect potable water systems from potential contamination, almost all local plumbing and building codes require irrigation systems to be equipped with a proper backflow prevention device to isolate it from the property owner’s drinking water source. In addition to having such a device on all systems upstream from an EZ-FLO fertigation unit, EZ-FLO has also designed in additional backflow prevention protection right into our units. 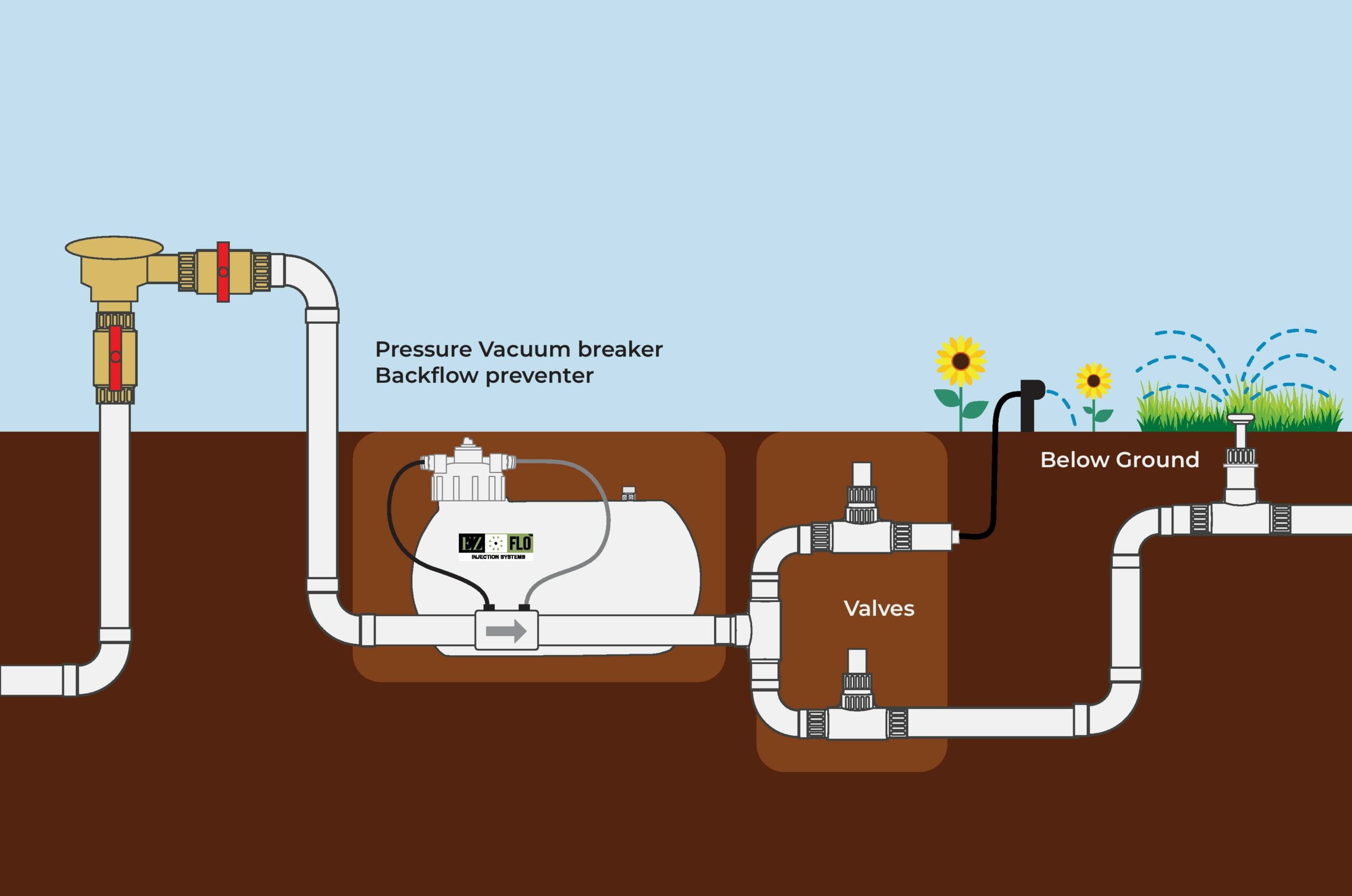 Backflow protection is required when using any fertigation device.  If your contractor says it is not needed or glosses over the issue, be concerned and seek another opinion.  There are a number of backflow prevention devices used with irrigation systems, but only two should be used with an EZ-FLO main-line system; an RPZ (Reduced Pressure Zone) or a PVB (Pressure Vacuum Breaker).

For the EZ-FLO hose and drip units attached to a water faucet (bib), the minimum backflow prevention device is an anti-siphon valve (ASV) upstream from the hose bib connection point.

All EZ-FLO installations, main-line or hose and drip, must have the appropriate backflow prevention device installed.

According to the ABPA, “An RP is a mechanical backflow preventer that consists of two independently acting, spring-loaded check valves with a hydraulically operating, mechanically independent, spring-loaded pressure differential relief valve between the check valves and below the first check valve. It includes shutoff valves at eachend of the assembly and is equipped with test cocks. An RP is effective against backpressure backflow and backsiphonage and may be used to isolate health or non-health hazards.

A PVB is a mechanical backflow preventer that consists of an independently acting, spring-loaded check valve and an independently acting, spring-loaded, air inlet valve on the discharge side of the check valve. It includes shutoff valves at each end of the assembly and is equipped with test cocks. A PVB may be used to isolate health or non-health hazards but is effective against backsiphonage only.”  -ABPA Website

PVBs are not appropriate for hilly landscapes where there are irrigation zones with elevations higher than the PVB installation since it will not protect against backpressure.  An RP should be used in these conditions.

In a letter dated May 14, 2004, the Foundation  has determined that our systems are classified as aspiration devices. Although our fertigation systems are sometimes termed “injection” devices, they actually are not an “injector” in the technical sense of the word because they operate under ambient water pressure present in the irrigation system and cannot add any additional backpressure to the system like other “injectors”. As such the Foundation has determined the minimum backflow prevention device that may be used is a Pressure Vacuum Breaker (PVB). Of course it is also acceptable to use a more protective device such as a Reduced Pressure-High Hazard Zone (RP) backflow preventer if required by local code. Therefore there are two backflow prevention devices that are acceptable in use with an EZ-FLO Main Line system according to the Foundation, either an RP or a PVB.

Follow all local codes when installing an EZ-FLO unit or any other fertigation device!

Even if a backflow condition were to occur in an irrigation system and the backflow prevention device failed, an EZ-FLO unit is designed to air-lock when flow reverses through the unit. At most, there will be up to 1/8 of a teaspoon of fertilizer that can be introduced in the inlet side of the water line before the unit stops proportioning. This means that only that amount, and the already diluted amount in the irrigation lines, could backflow.

Since EZ-FLO units main-line proportion at a maximum rate of 400 to 1 on the fast setting (15,000 to 1 on the slow setting) even if the residual of nutrient laden irrigation water in the irrigation system were to backflow, the concentration level of fertilizer or supplements in the main line water is so small that it presents only a miniscule risk. This of course assumes that the primary backflow prevention device has also failed, which is also highly unlikely. Finally we have always recommend that only non-hazardous fertilizers and supplements be used with our systems, further reducing the risk for dangerous contamination.  With the introduction of natural and organic products in 2006 and the increasing availability of food grade fertilizers in the market,  we have further reduced the potential for any hazardous health effects from using fertigation.

EZ-FLO knows of no event in its corporate history where the backflow prevention device has failed and where there has been backflow contamination with one of our devices. Also a copy of the University of Southern California-Foundation for Cross Connection Control and Hydraulic Research letter is available by Clicking Here

In light of the real risks to the environment through the overuse of traditional broadcast granular fertilizers and pesticides that are eliminated or drastically reduced when using an EZ-FLO fertigation system, EZ-FLO represents not a real risk but a risk reduction!  Most governmental decision makers appreciate learning more about the potential reduction in fertilizer needed since they are also responsible for reducing Non-Point Source Pollution and for reducing water usage in their communities.

Sub to our newsletter

All killer, no filler. We promise